CyberPoint has seen great success in using supervised machine learning for malware detection. A while back, however, some colleagues and I set out to investigate whether we could make any interesting discoveries by applying unsupervised learning to CyberPoint's malware dataset.

First, for the uninitiated, a little on the difference between supervised and unsupervised learning:

In supervised learning, one has a set of samples, each with an assigned label. In the field of malware analysis, a sample would typically be a file, and its label might be either benign or the malware family to which it belongs. The goal is: given a new sample, correctly predict its label. Supervised learning is a powerful tool that allows one to easily extract and utilize the knowledge contained in a dataset (e.g. of malware) that's already been analyzed, and automatically apply it to a new sample. One application of this is for fast detection of malware, even when designed to evade signature-based detection — while it is relatively easy to make small changes to a binary so that it doesn't match an existing signature, it is harder to change its essence as learned by a complex classifier.

Unsupervised learning, on the other hand, works without labels, and endeavors to understand the "structure" of a dataset. Most typically, it entails clustering, i.e., partitioning the data into "clusters" such that items in the same cluster are "similar" and items in different clusters are "different." If that sounds vague, it's because it is. While clustering algorithms are often taught as if they're a simple cut-and-dry problem-solving technique, using them in real life is a different story, as we will soon see.

I was actually wary of unsupervised learning even before we began. I was familiar with Kleinberg's negative result1 on clustering, which says that no clustering algorithm can be simultaneously rich, scale-invariant, and consistent2. I had also seen more recent work3 which poked holes in standard practices for determining the optimal number of clusters and measuring cluster goodness.

Nonetheless, we love playing with data (especially malware), so we dove in. We applied a variety of clustering algorithms, as well as other techniques, such as self-organizing maps and dimension reduction. We looked at high-level features and low-level features, as well as feature-less distance functions4.

Not surprisingly, we ended up with a big pile of clusterings of our data. Woohoo, right? But, wait. Were they informative? Were they "good"?

In our analysis, a few interesting things came to light, most of which were, at best, tangential to the task at hand:

But, mostly, though, what we had to show for our efforts was a big pile of clusterings that didn't provide any definitive insight. 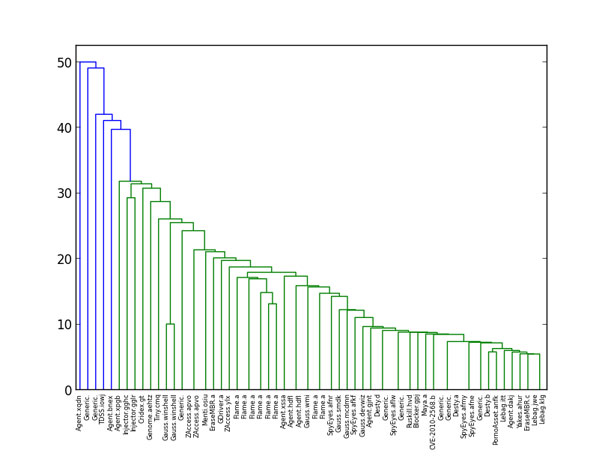 In the midst of this, I happened to discover a presentation by Rich Caruana, entitled "Clustering: Probably Approximately Useless?"6. While validating my sentiments that clustering was something of a can of worms, he also had some interesting suggestions for making it less so. One, meta-clustering, entails clustering your clusterings, and creating a representative cluster from each cluster of clusters, so that those sorting through them could more quickly hone in on which ones were of interest. This sounded very promising, but, in practice, didn't yield any additional insight for us. The second, semi-supervised clustering, entails having subject matter experts specify, before clustering, that certain samples belong in the same cluster and certain samples belong in different clusters; then they're guaranteed that any clustering created will pass a sanity check for whatever kind of structure they're seeking. This wasn't readily applicable in our situation, as we didn't know what sort of structure we were seeking. Still, both ideas gave me renewed hope for the general applicability of clustering.

That said, if you have a dataset that you don't know much about, and you're not sure where to begin, unsupervised learning might fit the bill. But if you find yourself drowning in disparate clusterings, none of which seems to be quite what you'd hoped for, know that you're in good company.

2A clustering algorithm is rich if for any possible clustering, there exists a parameterization under which the algorithm will yield that clustering; it is scale-invariant if it is not sensitive to scaling of the data (i.e. multiplying every value by some constant doesn't affect the results of the algorithm); and it is consistent if decreasing the distance between items assigned to the same cluster and increasing the distance between items assigned to different clusters doesn't change the result of the algorithm.